The How and Why of the Beginning of Tech Trek

The 1991 study Shortchanging Girls, Shortchanging America, researched and published by the AAUW Educational Foundation (as well as studies from other sources) indicated that young women tended to drop out of science and math courses during middle school years. In early adolescence, the research found, a focus on social acceptance begins to trump academic interests and achievement for many girls, even those who have previously been good and enthusiastic students. AAUW California decided to do something to stop this trend. That something was the Tech Trek Science and Math Camp for Girls, an idea conceived by AAUW California Program Director Marie Wolbach (Palo Alto, San Carlos) and encouraged by State President Karen Manelis (Fresno, Davis). The state board voted, in 1996, to apply for an EF (now called AAUW Fund) Community Action Grant to establish such a camp. Marie, Karen, and Fay Weber (Whittier) wrote the application for and received the $5,000 grant from AAUW National to hold a residential science and math camp.  The first camp was in 1998 at Stanford University.  Now there are 9 camps throughout California.

What is Tech Trek?

Tech Trek is a STEM (Science, Technology, Engineering, Math) camp designed to develop interest, excitement, and self-confidence in young women who will enter eighth grade in the fall. It features hands-on activities in STEM-related fields. In the residential camps, all sleeping, eating, instructional and recreational facilities are located on a university campus where camps are held.

The Tech Trek History of the Branch

During 1998 Vicki Spilkin was president with no TT chair of our branch. Ann McDonald was our Education Community Chair – she helped choose Jessica Kostewa from Parkway Middle School.  A donor paid the $500 for the Tech Trek at Stanford and the branch paid for her airfare.

In 1999 Tech Trek started on the UCSD campus.  Since then, our branch has provided at least eleven dorm moms including a head dorm mom, an assistant director, and several camp directors. We have sent 143 girls.

How to be involved

When you consider participating in one of our branch activities, you might think about being on the Tech Trek Committee. You will surely find that it is a win-win situation for you as well as some very deserving 12-year-old girls.  As a member of the committee, you will interface with middle school science/math teachers who nominate girls to go to Tech Trek camp.  You will read essays and participate in interviews as part of the process of choosing the girls who will attend camp. You will be assigned a camper to assist in filling out forms and getting prepared to go to camp. Often, troubled households and concerned parents need reassurance and support during the process of getting their daughter ready for camp.  Providing information and assurance to the girls and their families very often is a major task for committee members.

Once the girls go off to camp, committee members continue to follow their girls.  You will want to go to camp on the designated visitor day to see the girls in their classes, excited about math and science; and the thrill when they describe field trips and connections made with women scientists and engineers.  Visiting camp is an important event for all of the committee members…and we also have extended the invitation to members of our branch.

Though working on the TT committee involves a time commitment, be assured that there are usually very few complaints from the participants.  Members become fully invested in the difference they are making in a young girl’s life.  You should consider it too! 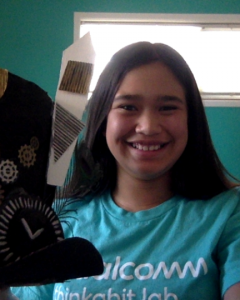 When COVID-19 canceled the 2020 in-person camp experience, our camp coordinator (and a La Mesa El Cajon Branch member), Dr. Mary “Mimi” Isaac, was already discussing options of pivoting the Tech Trek program into virtual possibilities with AAUW’s camp sponsors. She offered a virtual pilot of the robotics program to 40 campers in the Southern California area. She also recruited build coaches and other assistance from the support team that was set to provide for the in-person camp.

The success of the pilot resulted in expanding the virtual robotics core program statewide.  The virtual program has been enhanced, adding STEM workshops and delivering it to all California branches and their selected campers. The three one-week camps served 640 girls from 77 participating branches. Our branch sent 10 girls.  The girls were a combination of 2020 selected campers who did not participate in the pilot and 2021 selected campers.